Vuosaari Harbour aims to reduce the emissions from machinery

A recently published report specifies ways through which the emissions from machinery could be reduced at Vuosaari Harbour. Electrification seems to be an efficient solution in terms of both emissions and costs for machinery with high energy consumption and high utilisation rates. The roadmap prepared suggests that new technology be piloted in 2021–2027. In addition to this, a calculation tool was created for estimating the emissions and costs caused by machinery. This work was done as a part of the ‘HNRY – Carbon-neutral and Resource-wise Industrial Areas’ project.

A report prepared by VTT Technical Research Centre of Finland Ltd, Assessment and roadmap for the emissions reductions of machinery traffic at Vuosaari Harbour (a summarised description of the assessment results and the roadmap), presents measures to reduce the machinery emissions at Vuosaari Harbour by 60% by 2035. This is one of the goals of the Port of Helsinki Ltd’s Carbon-neutral Port 2035 action plan. Machinery accounts for ca. 9% of the emissions in the entire harbour area. The approximately 200 pieces of machinery in the area are largely owned by private companies providing port services, such as stowing companies.

How can we achieve the emissions reduction goals?

According to the report, the reduction measures should prioritise straddle carriers and terminal tractors, since these machinery types cover about three quarters of the machinery emissions in Vuosaari Harbour area. One of the key observations is that it will not be possible to achieve the reduction target unless straddle carriers are electrified in some way or renewable oil fuel is taken into use.

For high-consumption machinery with high utilisation rates, such as straddle carriers and reach stackers, electrification proves the most effective and cost-effective way of reducing emissions. The calculations also show that the Harbour’s electric grid should be sufficient for the electrification of all straddle carriers and terminal tractors. The parallel operation of the 33 straddle carriers at the Harbour requires roughly nine 600-kW quick-charging stations, which equals an investment of about 3–5 million euros. However, the electrification of smaller machinery, such as terminal tractors and forklift trucks, seems to increase the total costs. For these types of machinery, biomethane may be considered, in addition to renewable fuel oil. 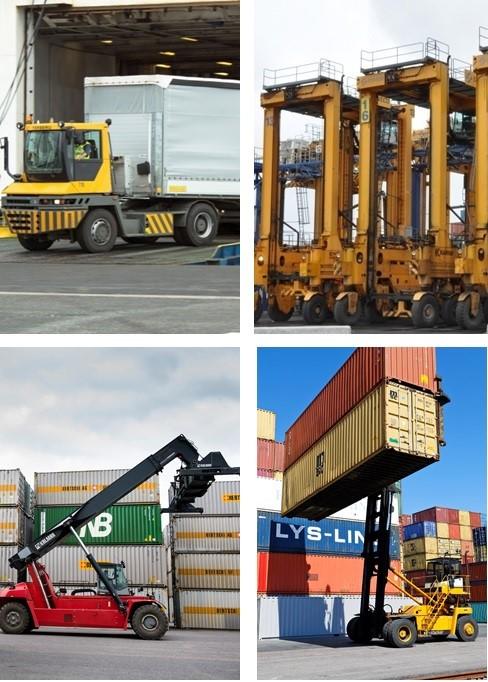 The Port of Helsinki Ltd has the opportunity to accelerate and promote the use of new technology and the progress towards the emissions reduction goal through its own actions. The primary means identified include incentives and support measures that treat operators as fairly as possible. The steering measures considered the least likely include direct demands in operators’ leases, for example, because the lease periods are long and the competitive situation is tense, among other reasons.

Financial incentives identified include direct support and discounts on different types of charges. For example, the Port could partially or fully subsidise the additional costs incurred from the renewable fuel oil used by the operators. This involves the risk that such a support measure may become a permanent way of reducing emissions. As such, it may hinder the transition to emissions reductions on market terms.

The roadmap proposes a pilot to assist large-scale transition

The port operations involve both requirements and opportunities for new kinds of driving power, which should be reviewed in terms of both the entire port and harbour and the individual operators and pieces of machinery. Determining the alternative driving power or emissions reduction solutions suitable for each type of machinery requires knowledge based on practical experiences. The roadmap for reducing emissions from machinery prepared during the work focuses in particular on a pilot project for new technology.

During the pilot planned for 2022–2027, operators would test key electric and hybrid machinery, various types of charging stations and operating models, and renewable fuels, amongst other things. This way, the solutions, operating methods and service models best suited to the harbour environment would be identified, and operators could learn to use them. The pilot would be preceded by a planning phase during which the solutions to be tested would be selected. Factors considered when making the selection include the dimensioning of battery capacity and charging systems, among other things. The pilot would support a large-scale transition towards market-based use of low-carbon driving power at Vuosaari Harbour. 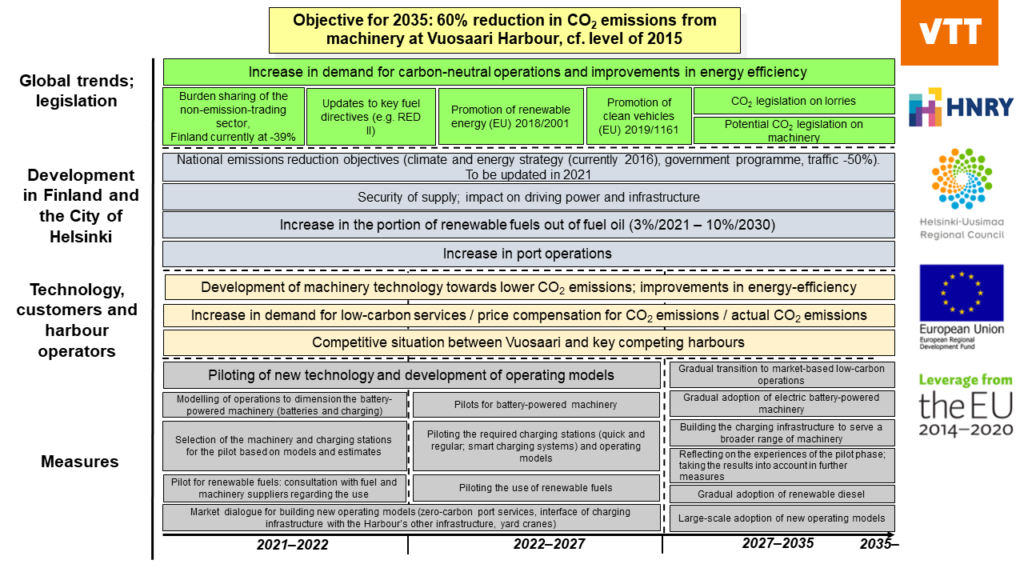 Figure: The roadmap of VTT Technical Research Centre of Finland towards the reduction of carbon dioxide emissions of machinery at Vuosaari Harbour by 60% by 2035 from the 2015 level.

The model also considers the direct calculated emissions of the machinery (TTW, tank-to-wheel), as well as their lifecycle emissions (WTW, well-to-wheel). The model is particularly suitable for stowing companies that own harbour machinery. It can also be applied to other types of machinery, as long as initial data is entered. The model consists of two parts:

There is also a tutorial video (in Finnish) available to support the calculation of emissions and costs. The video includes a brief theory section and a practical sample exercise through which you can learn about the calculation method used and its restrictions, the initial data required and ways of using the results.

The calculation model and the tutorial video have been produced by VTT Technical Research Centre of Finland as a part of the assessment and roadmap for the emissions reductions of machinery at Vuosaari Harbour.