Development programs for land mass coordination at the City of Helsinki

In Finland, the use of natural resources in building and construction works per capita is 2–3 times greater than the average in EU countries. The resource-wise use of rock and land masses has been recognized as one of the methods with the greatest potential for reducing CO2 emissions in urban planning and design. Construction works in Helsinki produce over 800,000 m3 of unspoiled surplus landmass annually, which was previously not utilized in the city. By better utilizing and reducing the amount of surplus land masses it has been possible for the City of Helsinki to save 5–10 million euros annually and achieve notable reductions in CO2 emissions.

In the early 2010s, the City of Helsinki was facing a need for a significant change in strategy regarding what to do with the surplus land masses generated from the fast-growing land development areas. One contributing factor was that the major landfilling areas for surplus land masses were closing. A full time land mass coordinator was recruited and the action plan for the years 2014–2017 was launched. This action plan was implemented fully with the help of the City of Helsinki’s investment funds. Other stakeholders that were essential for the success of this initiative were Helsinki Region Environmental Services Authority (HSY) and private sector operators.

Great savings have been measured between the years 2014-2019: 47 million euros, 6,9 million liters of fuel and 17,100 metric tons of carbon dioxide emissions. The reuse of land masses in construction projects had grown by over 1 million metric tons thanks to key actions taken during the development program. 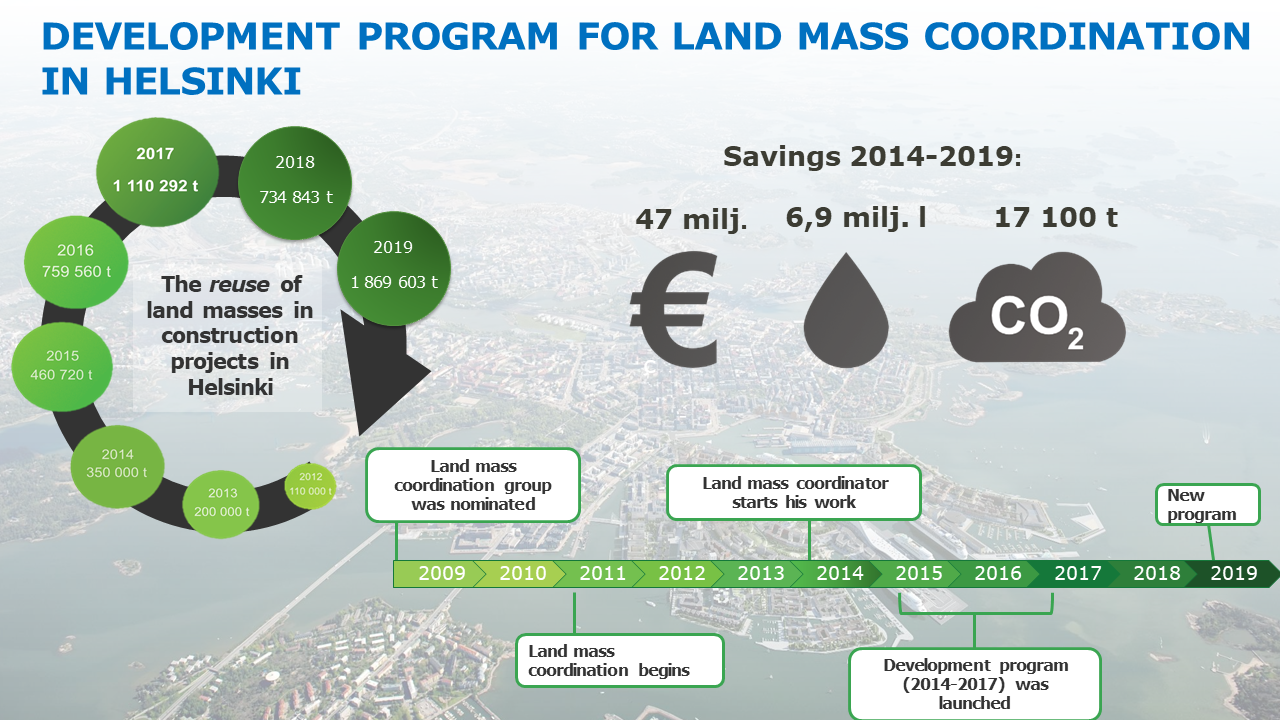 In 2019 the City of Helsinki launched a new development program The Principles for the Use of Land Masses, Rocks and Demolition Materials in Groundworks. Actions include a large range of processes, such as land acquisition and management, master planning, infrastructure planning, and design and construction works in Helsinki. The main targets of the new program are: