A 1960s apartment building in Lauttasaari, Helsinki, used to be heated with district heating. Now they are using a system combining recovery of exhaust air, geothermal heat and solar energy. Many housing companies in the area are now considering a similar transition.

A heating system renovation in a building more than 50 years old inevitably leads to increased expenses for the shareholders. On the other hand, it is also an excellent opportunity to update the building technology so that it will save both money and the environment.

“The exhaust air fans and district heating system’s heat exchangers needed to be replaced,” says the President of the housing company board, Vesa Tarvainen, describing the initial situation of the project.

The building, built in 1969, was originally heated with oil. Now, only the brick chimney stands as a reminder of the past. Before, flue gases streamed through the chimney up to the sky. Today, the heat recovered from exhaust air flows along the side of the chimney back to the heat distribution centre.
On the roof, Tarvainen presents the two new, still gleaming heat recovery devices.

“This is a quite a bit smarter solution than blowing heated exhaust air up into the sky.”

In the summer season, the waste heat of the exhaust air is enough to heat the whole building and the household water. When the weather turns cooler, the geothermal heat wells in the yard give more heat.

Solar panels were also installed on the roof as part of the energy renovation, and a significant part of their energy production is used to cover the electricity consumption of the heat pump now residing in the heat distribution centre.

“In summer, there has been enough solar power for the residents, too. The system is in operation and producing well,” Vesa Tarvainen says.

We also have a look into the building’s heat distribution centre, which is full of shiny new technology. Pipes carry the heat collected from the earth and the roof to the heat pump. The inverter mounted on the wall transforms the direct current collected by the solar panels to alternating current to be used in the building.

The Katajaharju energy renovation had a boost through housing company club operations and the Climate Info course organised by the Helsinki Region Environmental Services Authority (HSY), in which Vesa Tarvainen took part in autumn 2019.

“I was feeling much more confident about the energy renovation after the course gave me a better understanding of what we were about to embark on,” Tarvainen says. He also recommends the energy expert course for others.

The residents did not even notice when the building was disconnected from the district heating network. Tarvainen says that the original idea was to keep district heating as an additional heat source to heat recovery for colder seasons.

“However, this would have required us to replace the expensive heat exchanger, and the basic district heating charges would have kept going just as before.”

All top three potential providers that were chosen in the tendering process of the energy renovation recommended geothermal heating instead of district heating.

With all the offers on the table, Vesa Tarvainen compared them by calculating the life cycle savings. Smart Heating did not have the cheapest initial investment, but the life cycle review revealed it to be the most economical of the alternatives.

In the initial situation, the annual heating bill of the 24-flat housing company was about €30,000. After the new energy system was commissioned, the costs have decreased by 65% compared to the previous situation.

In other words, taking the heat from exhaust air and from the ground has caused the amount of purchased energy to plummet. The building’s total need for energy has also decreased, thanks to optimising the heating.

The current situation on the energy market is a source of uncertainty for everyone, but buying less energy for the entire housing company means that the impact of the rising prices will remain smaller. However, the system, especially the heat pump, still works on electricity, the price of which may fluctuate in the near future.

“Even though the price of district heating has increased even more [than the price of electricity], we still need to pay for every kilowatt purchased from external suppliers,” Tarvainen says and continues. “Due to this, it is important that our heating system is optimised and that we, the residents of the housing company, make sure that we do not use heating energy unnecessarily, even if we now produce it efficiently.”

“Window, facade and balcony renovations are also related to this, as they had improved the housing company’s energy management even before,” Tarvainen says.

Another plus side is that modern technology is quite compact. The renovation allowed splitting a small room off the heat distribution centre, creating a meeting room for the company board.

Trust is the key in housing company meetings

A well-prepared project was easy to present to the housing company’s meeting. The previous roof and facade renovations and yard renewal had gone smoothly.

“The shareholders trusted that if the board proposes something, it cannot be a totally bad idea,” Tarvainen says.

The residents also had some concerns, such as the sufficiency of heating. “We reviewed separately how the apartments can be kept warm also during freezing weather.”

When the extra general meeting greenlit the project, the work was ready to start.

Interest in the project’s funding and implementation

Investments in geothermal heat are no longer a rarity for apartment buildings: Service providers have the necessary expertise and housing companies share good practices with each other.

“Board representatives from several buildings have also visited us to see what we have done with the building,” Vesa Tarvainen says.

He also often talks about the project’s funding with the interested housing companies: “Our company just took out a regular bank loan that is paid back through the normal charges for housing company expenditure. We took out a loan that allowed us to keep the charges at their previous level.”

In the initial calculations, the investment’s repayment period was 15 years, but thanks to the energy subsidy granted to the project by ARA (the Housing Finance and Development Centre of Finland), the shareholders will get to enjoy the cost savings in full much faster than that.

“A building like ours can get a maximum of €4,000 per apartment as a subsidy from ARA. We got pretty much the maximum amount,” Vesa Tarvainen says happily.

Energy education and a project supervisor

Many housing companies from the 1960s and 1970s are now thinking about improving their energy efficiency. What tips does Tarvainen have for them? Firstly, he would advise to learn a little more about building services engineering. “Our board didn’t previously really have any in-depth understanding on how houses are heated or ventilated, either.”

Nowadays, Tarvainen speaks about the ventilation of an apartment building or the different heating systems like a trained professional. “The energy expert course was a great start for this,” Tarvainen states.

A supervisor who inspects the technology and writes the relevant memos hired by the housing company itself for the energy renovation also proved to be a good choice.

“The previous projects have shown us that this is worth it, even if it costs a few thousand.”

After getting the necessary basic education, the project’s frontman did not consider the energy renovation difficult: “The project was surprisingly clear, all in all.” 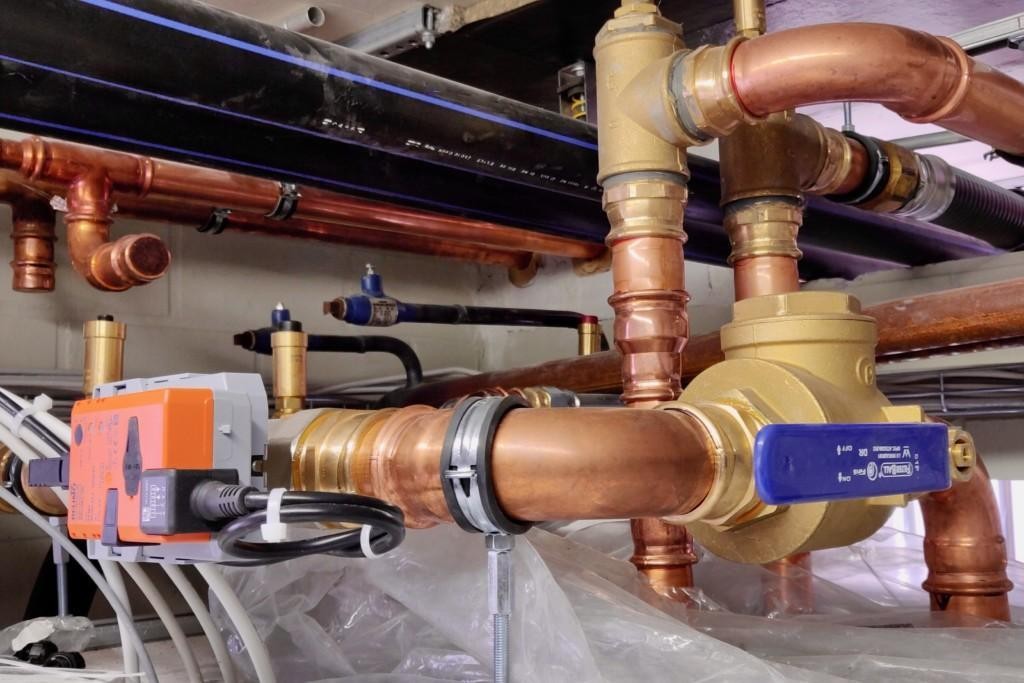 The Katajaharjuntie 15 housing company collects energy from the roof using solar panels and exhaust air heat recovery and from underground using the geothermal wells in their yard. The technology in the heat distribution centre was completely renewed. The heat pump utilises solar power and refines the collected heat so that it can be used in the radiator network and for heating household water.

Autumn 2019 Vesa Tarvainen participates in the energy expert course held by HSY’s Ilmastoinfo. After learning some background information, the board decides to move forward with the energy renovation.

Winter 2020 The board requests initial offers. The selected technology is heat recovery from exhaust air and geothermal heating.

May 2020 The project is presented to the general housing company meeting.

September 2020 The selected contractor and the board present the project plan. The additional general meeting makes the investment decision.

December 2020 Preparatory works are started, the facilities are cleared.

February 2021 Geothermal wells are drilled into the ground on the plot.

The City of Helsinki’s energy experts offer free-of-charge advice on energy renovations for housing companies. Learn more about the service.