‘Helsinki’s commitment to the ambitions goal of carbon neutrality creates a stable operating environment for businesses to develop their operations and make investments. The commitment, openness and new operating models that involve the entire field are extremely important in achieving the goals.’ 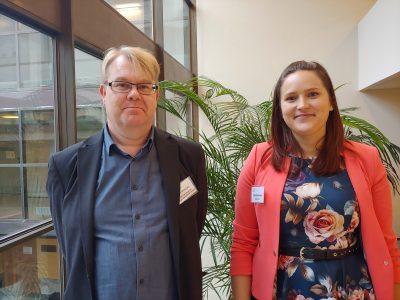 These are the views of Skanska’s Production Engineer Lotta Kamunen who took part in a seminar organised by the Climate Partners on 22 September 2019 at the Helsinki City Hall.

Helsinki intends to reduce the amount of emissions from construction sites as part of its Carbon-Neutral Helsinki 2035 action plan. The aim is to use pilot projects to create a model and a set of criteria for a zero emission and fossil fuel construction site. These will steer the operations at the city’s construction sites in the future.

‘Construction site machinery produces significant amounts of carbon dioxide, fine particles and nitrogen emissions, in addition to which the sites’ other adverse effects, such as noise and dust, cause harm to the nearby residents and passers-by. The city can affect the market through its acquisitions in order to expedite the change and provide test sites for finding solutions,’ says Environmental Inspector Jari Viinanen from the Urban Environment Division.

Helsinki is working together with the other Nordic capitals. The City of Oslo, in particular, has managed to stop using fossil fuels at its constructions sites by adopting biofuels. The aim is for construction sites to become emission-free by 2025, when, in practice, the machines at the sites will be running on electricity.

Helsinki is using Oslo as a model on how to interact with businesses and set tendering criteria.

This goes well together with Skanska’s own strategy. Skanska’s goal is to become carbon-neutral by 2045, including its entire value chain.

In order to achieve this, Skanska is focusing on those parts of the value chain that produce the most emissions. These include concrete, steel, asphalt and energy production, among others. The method of meeting the reduction goals involves open and smooth collaboration and responsible procurement processes.

‘The more orders we have for climate-friendly products, the more common and inexpensive they will become. This has already happened to products such as batteries. They have studied the lifecycle of electric work machines in Oslo and found it to be longer than that of fuel-powered machines,’ says Kamunen.

The main theme of the Climate Partners’ seminar was the significance of public procurement in climate change mitigation. According to Deputy Mayor Anni Sinnemäki, who opened the event, the city uses 2.5 billion euros on procurement every year.

‘This is a considerable amount. The city is looking for the best and most efficient solutions for its residents. We want to create a practical operating environment for businesses without lowering the bar, but instead continuing to strive towards the same ambitious goal,’ says Sinnemäki.

‘We need to understand where the money is and where emissions are produced. This knowledge will then be utilised when assessing the significance of procurement groups from the climate perspective and deciding on the reduction measures’ focal points. Buildings and construction are the key area.’

On 27 November, Helsinki City Council approved the budget for 2020. The Council decided that from the start of 2020 onwards, all of the city’s new blocks of flats must be planned to comply with energy class A. In addition to this, all the city’s renovation construction projects that begin in 2020 will be planned so that the energy requirements of the buildings will not exceed 80 per cent of the energy consumption requirements of buildings in the same category.

The event also included an up-to-date review on the level of plastic recycling in the metropolitan area, reduction of and compensation for aviation emissions, Kuninkaantammi’s wooden blocks of flats and SATO’s actions towards extending the lifespan of bathroom fixtures.