Apartment building from the 50s takes steps towards carbon neutrality

An energy renovation does not mean compromising the building’s original appearance. The character of this architecturally valuable apartment building in Herttoniemi was taken into consideration when planning the renovation as well as in its tendering and implementation. The end result is a gorgeous building that also meets the modern energy requirements.

“A renovation of an old building should be considered a long-term project,” says the former President of Lönegropen housing company’s board, Simo Kyllönen, who has plenty of experience in the matter after ten years as the board president.

Simo Kyllönen moved into the building in 2004. The first renovations were already in the plans back then. The work was planned in sections, and the architectonic values of the building had to be considered in each renovation project.

The building was designed by Hilding Ekelund, one of the most renowned architects in Finland. Some of his most notable works include the Helsinki Velodrome, the Töölö Rowing Stadium, the Olympic Village, the Kunsthalle Helsinki and Töölö Church.

Step by step towards energy efficiency

Fixing the plumbing and replacing the water fixtures with more energy-efficient ones were the first steps in the old building’s energy renovation. A long-term repair plan was compiled for the building in 2016, including the schedule for renovating the windows and the facade and repairing the thermal rendering and the roof. All repairs include some objectives for improving energy efficiency.

“Fixing the windows was at least as important. It allowed us to decrease energy consumption, which is just as important as the price of energy itself,” Kyllönen states.

“According to the long-term repair plan, the next renovation stages in the building are the facade’s thermal rendering and roof repairs. These repairs can increase the building’s energy efficiency even further,” Kyllönen states.

Luckily, the housing company has plenty of determination and understanding in the matter; the values of protecting the building’s architecture, climate-friendly housing and energy efficiency are important to the residents.

Thus far, the window renovation and the transition to geothermal energy are important steps that have allowed the housing company to achieve carbon-neutral heating operations and reduce their need for purchased energy. Repairing the old wooden window panes and making them more energy-efficient instead of replacing them with new ones is also a sustainable way of implementing the objective of carbon neutrality. 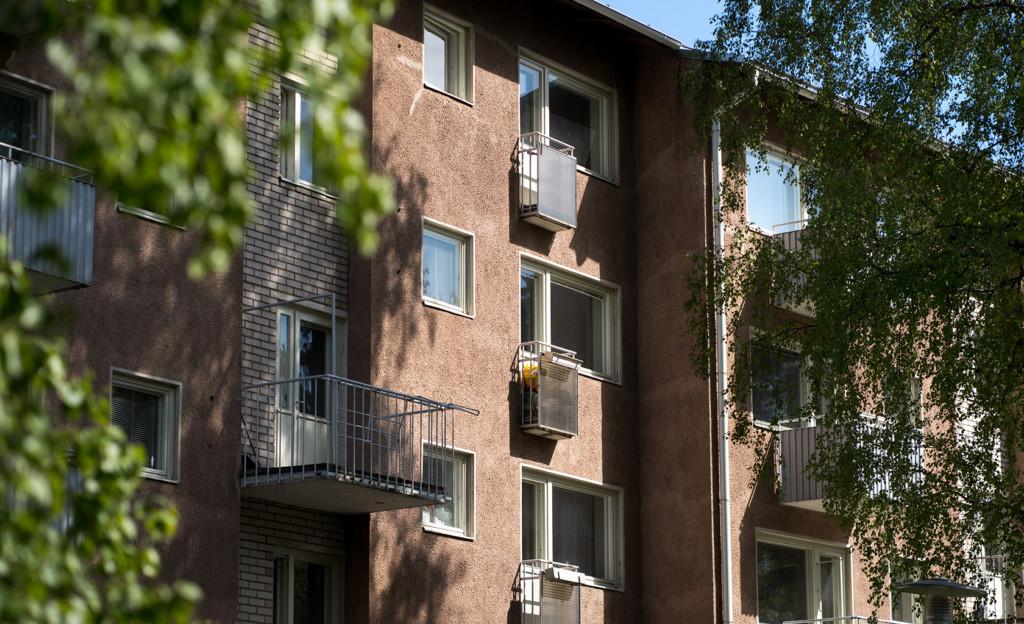 With energy renovations, the housing company Bostads AB Lönegropen has managed to reduce their consumption of purchased energy by more than 60 per cent.

Five questions about the energy renovation of an old building

Many parts of the Lönegropen housing company’s energy renovation were perfect successes, but they also ran into some surprises along the way. Simo Kyllönen shares his experiences.

1.  What kinds of issues did you encounter when planning the energy renovation?

“When the reviews were made, there were no companies on the market that could have provided a comprehensive solution for this kind of a building. And I don’t think there still is a simple model for renovating old buildings such as ours.

For example, our building has the original wooden windows that were renewed to meet the current energy standards. When attempting to get an architecturally valuable building to meet the energy efficiency requirements, there were not that many experts in the field of repair construction of old buildings available. Finding one is challenging. We also found one by lucky coincidence,” Kyllönen says.

“Renovating an old building requires expertise in repair construction as well as other special competence. This is why dividing the renovation into different sections and carrying it out over a longer period of time has been important both financially and for completing the project. This has allowed us to manage the entirety of the project,” Kyllönen summarises.

2.  What were the reasons behind your transition to geothermal heat?

“The housing company’s heat-exchange facility of district heating would have needed to be replaced in any case, so this was a good time to make some calculations on which heating solution would reduce our energy bill the most.

The advantage of geothermal heating is that a sufficient level of heating can be acquired with a smaller amount of purchased energy. Purchased energy will transform from district heating to energy, and therefore the key aspect is how the prices of district heating and electricity will develop in relation to each other. The prices of them both have increased a great deal, but the difference in profitability for geothermal heat still remains.

The decision was also made easier by the fact that there were no underground zoning restrictions preventing geothermal heat in the plot, there was enough space for the geothermal heat wells and pipes and the ground was suitable for drilling in the wells. The radiator network of the old building was also compatible with the requirements of a geothermal heating system.

The transition to geothermal heat helped reduce the amount of purchased energy by 60%, which means that it will cut the housing costs significantly in the long term, even if there are many uncertain factors about the price of energy right now. This means that the housing company must pay a great deal of attention to its electricity contract,” Kyllönen says.

3.    How have the energy renovations proceeded?

“When we started implementing the geothermal heating project, the energy company Helen did not have much experience in what to do about those who are terminating their district heating contract. Due to this, terminating our district heating contract, making a new electricity contract and installing the new electrical enclosure became somewhat delayed and had some uncertainties, which caused some additional costs to us. These days, geothermal heating has become an important part of Helen’s services.

The window renovation, on the other hand, was a more challenging project, as we had to fit new technology together with old architecture.

Moving forward, we plan to improve the building’s energy efficiency through insulation, and this facade renovation will be at least as challenging a project. Unfortunately, suitable professionals of repair construction that are also familiar with applying new energy saving technologies to traditional wall materials seem to be in great demand.”

4.  How much have the renovations cost?

“The investment in the transition to geothermal heating was €315,000, and the company took out a loan of 15 years for it. The savings for not paying for expensive district heating are enough to cover the annual €22,000 costs of the loan.

Even though the price of electricity has doubled for us compared to last year, the price of district heating has also increased so much that the savings are still more than the annual costs of borrowing. With the increases in district heating prices presented by Helen for the next winter, geothermal heating will become even more profitable for us, especially as we succeeded in making a two-year fixed term electricity contract last year.

The window renovation was a large investment, costing €700,000. Factory-made window panes made from aluminium would probably have been available at cheaper prices, but they would not have suited the building’s architecture, and fitting them in the building’s highly detailed structures would also have been expensive.”

5.  Was the energy renovation financially profitable?

“The implementation must be considered against the long-term financial plan while thinking about how to mitigate the increase of costs. In our building, there is always a renovation underway. Facade, roof and balcony renovations are still due for a building of this age, and these are large, expensive projects.

Our housing company is located on the City of Helsinki’s rental plot, and the rent will increase until 2025. This is why all methods allowing us to mitigate the increase of costs in the long term can be considered reasonable. Therefore geothermal heat seemed like a reasonable housing policy. As it also offered us a chance to improve the climate-friendliness of our housing, there was no reason to not make the switch from district heating to geothermal heating.

When new renovations are started again, the other costs will have come down. This maintains the overall profitability, even if we have to renew some of the devices.”

Current president of the housing company board: Vesa-Matti Virtanen

The Bostads AB Lönegropen housing company also received an honorary mention in the City of Helsinki’s Environmental Awards in 2020.

An old apartment building requires several renovations before energy efficiency can be achieved and energy costs can be brought down. Usually, it is not possible to do everything at once – and neither is it reasonable. Review the renovations one by one.

Use external experts when planning the renovations. The importance of good planning cannot be overstated. A review and repair plan made by an expert may seem like major investments, but the costs are often small compared to the expenses of delayed projects or unpleasant surprises that may turn out to be very pricey.

Ask for offers from several different experts. This is one of the bottleneck issues in housing companies’ renovations, as it is difficult to find information about suitable experts. Finding good contractors has a major impact when making decisions on renovation options.

Find out during the tendering process what the contracts offered by different companies include, especially with regard to aftersales services after the equipment has been delivered and installed. Even if the company is offering a turnkey installation service, it is important to ensure what the maintenance security and the service actually include. Who will receive the notices of defects, what happens after it is received, what kind of service do the residents get? The duties of the maintenance company, the property manager and the board should be reviewed so that the division of responsibility is clear if any problems occur. The responsibilities need to be shared and the actions organised in a reasonable way.